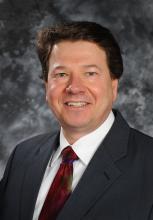 An article in the Post Register newspaper (available online to subscribers) noted that Ginosar is the only current INL scientist with 20 patented inventions, a mark reached only by two others who are now retired. In addition to patents, Ginosar has written more than 35 publications and six book chapters.

Ginosar is a distinguished staff scientist at Idaho National Laboratory, and market area lead for advanced manufacturing and intelligent controls at INL. He studied chemical engineering, earning a doctorate at the University of Kansas and a bachelor's degree at the University of California, Davis.