The atomic nuclei of many elements have a quantum property known as spin, which grants them magnetic moments and angular momentum. When spins are placed in a strong magnetic field, their magnetic moments couple with the

applied magnetic field. Because the nuclei do not exist in a vacuum, the local magnetic field at the nuclei is also partially shielded by the presence of the nearby electrons. This magnetic shielding interaction is highly sensitive to local structure and is valuable to determine the bonding environment of a given atom. Secondary coupling interactions between nuclei, either through-space or through-bonds, can further reveal the relative positions of different atoms in a material or molecule. The NMR resonance frequency is also sensitive to other phenomena that can lead to the generation of local magnetic fields and is useful for the characterization of quantum materials such as superconductors and topological insulators.

limitation by coupling it with another spectroscopic method: electron paramagnetic resonance (EPR). In a typical MAS-DNP experiment, samples are placed into contact with an unpaired electron source (the polarizing agents), and a high-power high-frequency microwave beam, produced by a gyrotron, is used to saturate the EPR transition of the polarizing agent and mediate a transfer of magnetization to the nuclear spins. Excitation of the now hyperpolarized nuclei yields signals 2-3 orders of magnitude stronger, thus enabling the detection of far lower quantities of nuclei, such as the atoms situated exclusively at the surfaces and interfaces of materials.

The dipolar interactions between the 1H nuclei often cause a loss of resolution and chemical information. Most 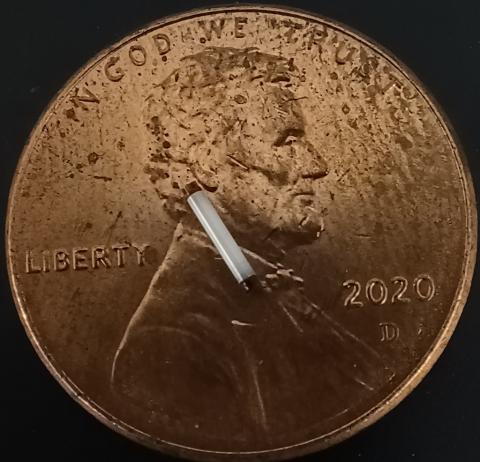 anisotropic interactions can be removed by rapidly rotating the sample about the so-called magic angle (~54.74°), which is the angle that bisects the cube. In the case of homonuclear dipolar interactions, the rotation rate must also exceed the strengths of the interactions that are being averaged, with resolution generally improving at faster spinning rates. As NMR rotors (sample holders) are air-driven, they are limited in frequency by the speed of sound, which has led to the progressive shrinking of rotors to the sub-millimeter scale where higher rotation frequencies can be achieved while maintaining a lower surface velocity. The Ames Laboratory Solid-State NMR Laboratory possesses a 0.75 mm ultrafast-MAS probe capable of achieving spinning frequencies of up to 100 kHz (6M RPM!), among the fastest worldwide.

Originally developed at the Pacific Northwest National Laboratory, specially designed MAS rotors enable the simultaneous detection of high-resolution NMR spectra from a mixture containing solids, liquids, and gases. This design is particularly beneficial for the in situ studies of heterogeneous catalytic reactions.