A Geometric Paradigm for the Optical Properties of Crystals 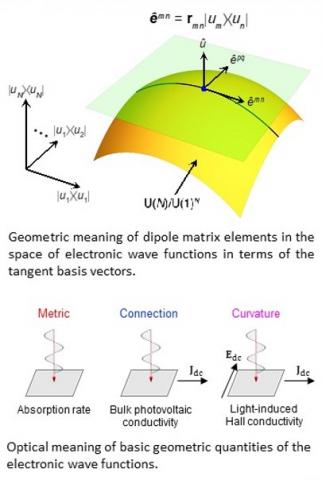 functions, so-called quantum geometry. Much progress has been made in understanding the role of quantum geometry in electrons’ response to static or slowly oscillating electromagnetic fields. However, little progress was made for rapidly oscillating electromagnetic fields, namely, light, which leads to transitions of electronic states in materials. This was due to the absence of a theoretical framework for describing the geometry of a pair of states involved in an optical transition.

We resolve this timely and fundamental issue by formulating a Riemannian geometric theory of optical transitions. Our idea is novel but simple: identifying the transition dipole moment as the tangent vector on the manifold of electronic wave functions. This makes it possible to understand the full geometric meaning of optical response functions due to electric-dipole transitions, which is the leading optical transition channel. Our theory is very general, going beyond Berry’s phase and applying to arbitrary nonlinear order in any weakly correlated systems, thus opening up an avenue for a complete understanding of quantum geometric optical responses.