Polystyrene waste is everywhere, and it’s not biodegradable. Scientists just found a way to break it down.

Scientists at the U.S. Department of Energy’s Ames Laboratory and their partners from Clemson University have discovered a green, low-energy process to break down polystyrene, a type of plastic that is widely used in foam packaging materials, disposable food containers, cutlery, and many other applications.

Polystyrene is part of a much larger global plastic waste problem. Hundreds of millions metric 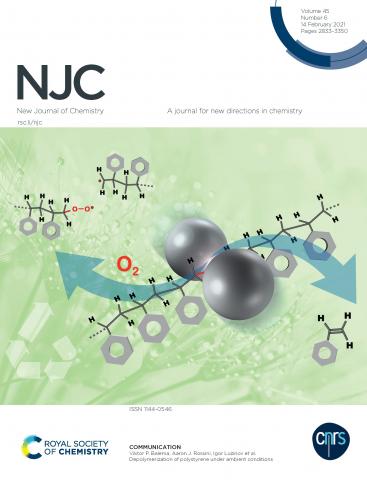 tons of polymers are produced each year, a large majority of which is discarded after use. Due to the chemical stability and durability of industrial polymers, plastic waste does not easily degrade in landfills and is often burned, which produces carbon dioxide and other hazardous gases. In order to stop the growing flood of polymer waste and reduce carbon dioxide emissions, plastics have to be recycled or converted into new value-added products.

Currently, recycling of the vast majority of plastics is not economically feasible; their sorting and separation are time and labor intensive, while chemical processing and remanufacturing requires a significant energy input and toxic solvents. Re-processed polymers often show inferior performance to that of the freshly manufactured “made from scratch” materials.

A team of scientists at Ames Laboratory used processing by ball-milling to deconstruct commercial polystyrene in a single step, at room temperature, in ambient atmosphere in the absence of harmful solvents. Ball-milling is a technique that places materials in a milling vial with metal ball bearings which is then agitated until a desired chemical reaction occurs. Called mechanochemistry, this experimental approach has numerous applications in new materials synthesis, and attractive features where plastics recycling is concerned.

The deconstruction of polystyrene proceeds through a series of chemical events involving mechanical cutting apart of the macromolecules, which generates free radicals detectable in the milled material even after its prolonged exposure to air. The metal bearings used for milling and the ambient oxygen act as co-catalysts that enable extraction of the monomeric styrene from the oligomeric radical-bearing species formed. The experiments showed that the temperature rise in the material during milling is not responsible for the observed phenomenon since the temperature inside the milled powder does not exceed 50℃ while the thermal decomposition of polystyrene in air starts at about 325℃. The Clemson’s group confirmed the comprehensive deconstruction of the original polymer into smaller fragments, oligomeric materials, suitable for further processing into new value-added products.

“This method represents an important breakthrough that enables dismantling of a polymer simultaneously with its break-down under ambient conditions, that is, ~300℃ below the thermal decomposition temperature of the pristine material” said Ames Laboratory Senior Scientist Viktor Balema. “We think this proof of concept is an exciting possibility for developing new recycling technologies for all kinds of plastics, and that will contribute to establishment of the circular economy.”

His partner from Clemson University, Kentwool Distinguished Professor Igor Luzinov, further commented that “this discovery opens new avenues for low temperature recovery of monomers from multicomponent polymer based systems such as composites and laminates.  Also, our technology will allow extracting the monomer from crosslinked materials containing styrene units in their structures.”

Alfred P. Sloan Foundation Research Fellow, Professor Aaron Rossini of Iowa State University, further noted that “electron paramagnetic resonance spectroscopy shows large concentrations of free radical carbon-centered species in polystyrene that was milled in air. This is a startling result because free radicals are normally very reactive. Also, the presence of the radicals gives direct evidence that the milling directly causes scission of the polymer chains. We expect that the reactive sites associated with the free radicals can be used to functionalize the processed polymers to obtain new value-added products.”

The research was funded in part by Ames Laboratory’s Laboratory Directed Research and Development (LDRD) Program.