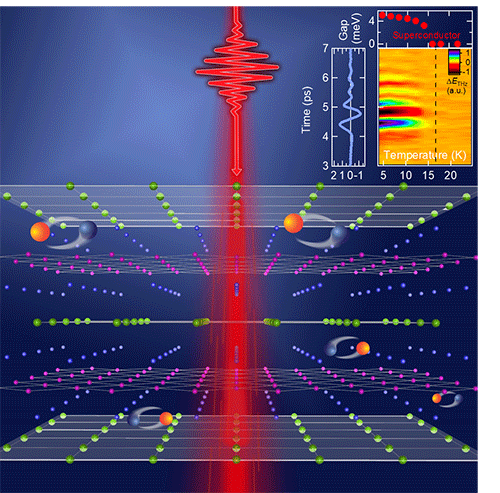 A team of experimentalists at the U.S. Department of Energy’s Ames Laboratory and theoreticians at University of Alabama Birmingham discovered a remarkably long-lived new state of matter in an iron pnictide superconductor, which reveals a laser-induced formation of collective behaviors that compete with superconductivity.

“Superconductivity is a strange state of matter, in which the pairing of electrons makes them move faster,” said Jigang Wang, Ames Laboratory physicist and Iowa State University professor. “One of the big problems we are trying to solve is how different states in a material compete for those electrons, and how to balance competition and cooperation to increase temperature at which a superconducting state emerges.”

To get a closer look, Wang and his team used laser pulses of less than a trillionth of a second in much the same way as flash photography, in order to take a series of snapshots. Called terahertz spectroscopy, this technique can be thought of as “laser strobe photography” where many quick images reveal the subtle movement of electron pairings inside the materials using long wavelength far-infrared light.

“The ability to see these real time dynamics and fluctuations is a way to understanding them better, so that we can create better superconducting electronics and energy-efficient devices,” said Wang.

Ames Laboratory scientist and ISU professor Paul Canfield, expert in the design and characterization of iron pnictides, created the single crystal sample used in this investigation. Martin Mootz and Ilias E. Perakis, at University of Alabama Birmingham, developed the theory to explain the observation.

DOE’s Office of Science is the single largest supporter of basic research in the physical sciences in the United States, and is working to address some of the most pressing challenges of our time.  For more information, please visit science.energy.gov.