The discovery may lead to more efficient processes in many industries, including pharmaceuticals and biofuels production. 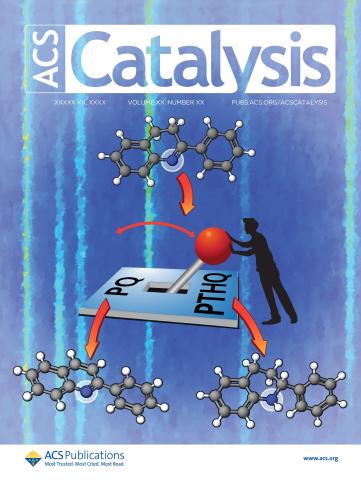 Scientists at the U.S. Department of Energy’s Ames Laboratory and their colleagues have discovered a way to untangle the mysteries of complex reaction networks by employing a measurement tool in a unique way.

Catalysis is a fundamental chemical process used in many manufacturing industries-- it speeds the breakdown or combination of compounds into new ones, for the production of things as varied as foods, medicines, plastics, and fuels. Making catalysis more precise, efficient and multi-functional has the potential to reduce the number of steps in manufacturing processes, reduce waste or harmful byproducts, and reduce energy consumption.

To do this, Ames Laboratory associate scientist Long Qi used a newly-developed tool, called operando magic angle spinning nuclear magnetic resonance spectroscopy (operando MAS-NMR), and applied it to catalytic reactions at real time under high pressure. In this way, Qi was able to map the complex activity unfolding as a catalyst transforms and rearranges molecules.

“It’s not just one or two or three molecules. In this experiment, we identified six intermediate species, two main products, and 10 transformation steps, and that level of complexity is a feature of these networks” said Qi. “The information we gained in this work is very useful in order to achieve higher productivity out of these complex reaction networks.”

“The problem with traditional investigations of catalysis is that we see what we put in at the beginning and we see what we get out at the end, but what is happening in the middle is the missing link,” said Wenyu Huang, a scientist in Ames Laboratory’s Chemical and Biological Science Division, who performs research in the areas of heterogeneous catalysis using intermetallic compounds (IMCs), and metal organic frameworks (MOFs). “In this work, we demonstrate that understanding these intermediate steps is the key to being able to tune these processes to achieve the desired end products.”

The team mapped a catalytic system that is of interest because its products can be used as key components of pharmaceuticals or in hydrogen storage technologies. With the knowledge they gained by the operando MAS-NMR mapping, they were able to select production of either tetrahydroquinoline or quinoline out of the reaction by adding an additional catalyst to act at a kinetically-controlled critical step, with water as the only byproduct.

“The idea that we can switch up products for on-demand synthesis is a new concept,” said Qi. “The implication for research is that we can avoid lengthy trial and error experimentation. For industry, it has the potential to streamline production and reduce costs.”