Ames Laboratory associate scientist Frederic Perras is one of 76 researchers selected by the U.S. Department of Energy’s Office of Science from across the nation to receive significant funding for research as part of DOE’s Early Career Research Program. Now in its eleventh year, the Early Career Program is designed to bolster the nation’s scientific workforce by providing support to exceptional researchers during crucial early career years, when many scientists do their most formative work. 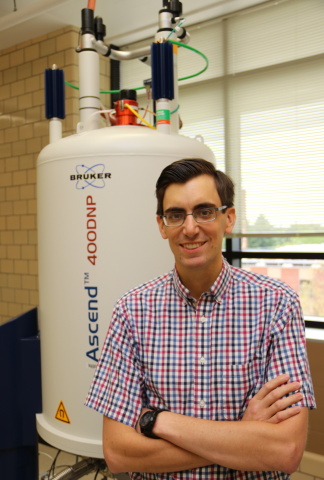 "The Department of Energy is proud to support funding that will sustain America's scientific workforce, and create opportunities for our researchers to remain competitive on the world stage," said Under Secretary for Science Paul Dabbar. "By bolstering our commitment to the scientific community, we invest into our nation's next generation of innovators."

As an Early Career Research Program selectee, Perras will receive $500,000 per year for five years for research that will focus on the use of solid-state Nuclear Magnetic Resonance (NMR) and Dynamic Nuclear Polarization (DNP) for the measurement of motional dynamics in heterogeneous catalysts and hopefully uncover how these molecular motions impact catalytic activity and selectivity.

“NMR spectroscopy is unique among characterization tools in that it is sensitive to dynamics over a time scale spanning at least 10 orders of magnitude and can also resolve molecular structures with sub-angstrom precision,” Perras said. “Recently, with Ames Lab’s and others’ development of ultra-fast magic-angle-spinning and dynamic nuclear polarization, it has become possible to extend the reach of NMR spectroscopy and yield the first three-dimensional structures of single-site heterogeneous catalysts.”

“The objectives of this research program are to build on these pioneering developments to not only reveal the precise structures of catalytic sites but also evaluate how these three-dimensional structures evolve in time,” he continued. “The research will uncover novel dynamic structure-activity relationships that could in turn be used to rationally tune the selectivity, or activity, of a catalyst.”

“Fred is a unique talent and a young star in physical chemistry,” said Ames Laboratory scientist Marek Pruski, who was responsible for bringing Perras to Ames. “Since joining our group he has developed several groundbreaking solid-state NMR techniques aimed at studying catalytic interfaces. The ideas which he described in his Early Career proposal derive from deep understanding of how the nuclear spins can be orchestrated to reveal both structural and dynamic information about catalytic sites.”

“This is a wonderful recognition of Fred’s talent and we are fortunate to have him as part of Ames Laboratory’s research team,” said Ames Laboratory Director Adam Schwartz. “It will provide a real boost to his research efforts and we look forward to his continued contributions as well as new directions to our catalysis and characterization research.”

Perras’ new research efforts will be further enhanced by upgrades currently being made to consolidate and improve Ames Laboratory’s NMR capabilities.

“The new NMR facilities that are being constructed will be instrumental in the success of this program,” Perras said. “We will have new capabilities for wet chemistry and the handling of air sensitive samples which will be needed for the study of dynamics.”

“The new lab will also consolidate our instruments and leave space for future growth of the facility which I believe will be needed soon due to the growing number of programs at Ames Lab that now rely on solid-state NMR,” he added. “The new space will create a world-class NMR center that will help attract the best postdocs to work in Ames.”