Physicists at the U.S. Department of Energy’s Ames Laboratory have successfully performed measurements of an iron-based superconductor in an important but difficult-to-reach regime where critical quantum fluctuations dominate the physics. Using a new sensing technique, they accurately mapped quantum phase transition—a phenomenon that is theorized to be closely coupled to superconductivity—deep inside the superconducting state.

“This is a truly fascinating result in the science of superconductors-- getting a clear picture of how quantum phase transition coexists with superconductivity. It appears that the superconducting phase protects quantum critical behavior 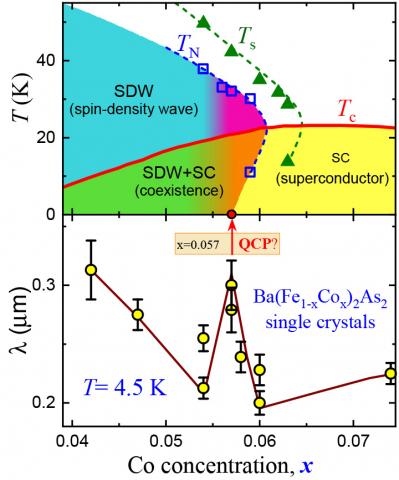 from the effects of disorder. This is quite remarkable!” said Prozorov, an Ames Laboratory physicist. “As we continue to study other materials with this new capability, it will help answer important theoretical questions about the origin of unconventional superconductivity.”

The team used the NV scope to accurately measure the London penetration depth, which is the depth that a magnetic field penetrates into a superconductor from its surface. This depth is directly related to the effective electron mass, which is the quantity affected by quantum fluctuations and signals the existence of quantum phase transition. By systematically measuring different compositions of an iron pnictide compound, Ba(Fe,Co)2As2, grown at Ames Laboratory by Paul Canfield’s research group, Prozorov’s team could map the presence of the quantum phase transition normally hidden under superconductivity “dome,” as the temperature approaches absolute zero.

Prozorov leads a team of scientists in his low-temperature lab at Ames Laboratory, examining the intriguing behaviors of superconductors, and attempting to untangle how various quantum phenomena affect their performance. They specialize in the development of unique ultra-high precision and sensitive experimental techniques to measure the optical, magnetic and electric signatures of these behaviors. The NV scope was built from the ground up at Ames Laboratory by Staff Scientist Naufer Nusran and graduate student Kamal Joshi. It is an optical magnetometer that takes advantage of the quantum state of a particular kind of an atomic defect, called nitrogen-vacancy (NV) centers, in diamond. Nusran also devised the novel way to employ the NV centers to measure lower critical field that leads to London penetration depth.

“London penetration depth is one of the most fundamental parameters describing superconductors; it basically tells you how robust superconductivity is,” said Prozorov. “I’ve been measuring this quantity using different techniques for most of my research career and NV sensing represents a significant advancement in experimental superconductivity.”

Seven years ago, Prozorov’s lab was part of an international research collaboration that found the first clear evidence that quantum critical point (QCP) survived deep in the superconducting state. The current work, using novel approaches, examines superconducting systems with a substantial amount of disorder. Together, these works prove that quantum phase transition and critical fluctuations not only coexist with superconductivity, but may even be protected by it from the effects of disorder. The results are another important clue to solving the mystery of iron-based superconductivity.

“Yet, there is a lot more to do, in order to fully explore the science of unconventional superconductors in general. For that, newer and more sophisticated methods of quantum sensing will have to be developed.” said Nusran.  Novel quantum sensing methods that can probe quantum fluctuations at the nano-scale would enable a deeper look into competing and co-existing quantum phases in high-temperature superconductors and many other material science problems. "These novel capabilities will ultimately shed light on the limiting conditions and feasibility of superconductors and other quantum materials for technological applications."

DOE’s Office of Science is the single largest supporter of basic research in the physical sciences in the United States, and is working to address some of the most pressing challenges of our time.  For more information, please visit science.energy.gov.