In 2022, Ames National Laboratory celebrates a milestone ­– 75 years as a national laboratory dedicated to the pursuit of research in materials science. While the Department of Energy-led research institution’s reputation in this field is widely recognized today, it is less well understood just how revolutionary Ames Lab’s beginnings were.

“Materials science as a research discipline didn’t quite exist in 1942. There was chemistry, there was physics, there was engineering, and millennia of humans adapting materials for new and better purposes over time. But Ames Lab was several decades ahead of the idea that, by understanding matter at a fundamental level, we could create materials in very specific ways that serve the development of new technologies,” said Adam Schwartz, director of Ames Lab. 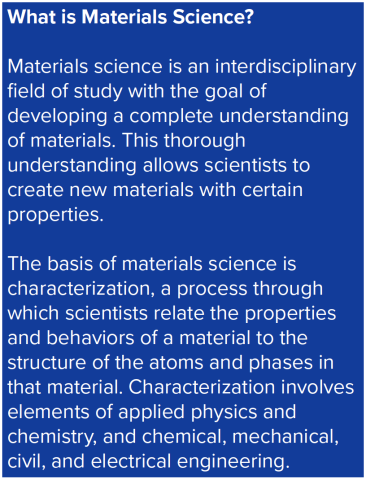 Born out of the atomic race during World War II, Ames Lab began as the “Ames Project.” The U.S. joined WWII after the Japanese attacked Pearl Harbor in December of 1941. Just thirteen days later, Nobel Prize-winning physicist Arthur Compton was put in charge of the plutonium project, which eventually became the Manhattan Project. The goal? To design and build an atomic bomb.

Conscious of the fact that Nazi Germany was also working quickly toward gaining nuclear weapons capabilities, Compton established a metallurgical laboratory at the University of Chicago in February 1942. He hired Frank Spedding from Iowa State College (now Iowa State University), an expert in rare-earth elements, to head the laboratory’s chemistry division. Due to a lack of space at the University of Chicago, Spedding proposed organizing part of the chemistry division at Iowa State College with the intention that the Ames staff would eventually move to Chicago, a move which never took place.

Spedding had colleagues who were eager to help on the project, but his team also recruited young scientists to join the effort.

“I’m Robert W. Holmberg, and I like to tell people I’ve never had an honest job. I’ve worked for the Manhattan Project or its predecessors all my life,” said Holmberg in a 2005 interview. He became involved in the Ames Project after a representative from the metallurgical laboratory went to Iowa State College to recruit students.

Homberg said, they “couldn’t tell us what they were doing, but it had to do with energy, and it was going to revolutionize the world.”

After initially being hired as a civilian, Holmberg was drafted, and returned to serve on assignment at the Ames Project as a private in the Army. "Quite a reduction in pay, but it was better being a private in a laboratory than a private in a war zone,” he said.

Another scientist who worked on the Ames Project was Fred Vaslow, who grew up in Chicago and attended the University of Chicago. “I started graduate school, and then the war came along,” said Vaslow in a 2013 interview. “My boss went off to work on the Manhattan Project. I was still doing graduate work. I got on a project at the University of Chicago that was supposed to make a volatile compound of uranium, which eventually we did.”

When that project ended, Vaslow went to work on the Ames Project. “I went out to Ames, Iowa, where there was another part of the Manhattan Project. I don’t know if it was called the ‘Manhattan Project.’ That was under a Dr. Frank Spedding, who was an expert in rare-earth chemistry,” he said.

The purpose of the Ames Project was to produce high purity uranium from uranium ores. Harley Wilhelm, who worked with Spedding from the beginning of the project, is credited with developing the Ames Process for purifying uranium.

“One of the interesting things about the people at Ames is that they developed a very nice method for making very pure uranium billets, which they did,” Vaslow recalled. The uranium billets he referred to were large blocks of 90% pure uranium that were cast into 5 1/8 inch long ingots, then further cut into two to three inch pieces called eggs.

In less than a year, the scientists in Ames had produced enough purified uranium to supply the world’s first atomic nuclear reactor, which launched in Chicago on Dec. 2, 1942. The project went on to supply 2 million pounds of uranium to the war effort, until industry took over production in 1945.

The amazing work in materials conducted by the scientists working on the Ames Project propelled the establishment of the Ames Laboratory in 1947 by the U.S. Atomic Energy Commission, now the U.S. Department of Energy (DOE). Since then, Ames Lab has continued to develop as a leading center for materials science research, a reputation which persists today.

While the Ames Project’s research and development was a major factor in the Allied victory in WWII, dedicating research specifically to materials science was an idea that was several decades in the making. As written in the Carnegie Mellon University Encyclopedia of Science, materials science was not formally established as a discipline until around 1970.

Staying true to its origins, the mission of Ames Lab is to deliver critical materials solutions to the nation. The same future-focused thinking that encouraged materials science research before it became a discipline remains an important aspect of research at the lab. Researchers are working to address future critical chemistry and materials challenges with a particular focus on rare-earth elements, alloys, and compounds.

There have been a lot of changes throughout the world since the lab was established, and research at the lab has reflected those changes. According to Tom Lograsso, director of the Critical Materials Institute, work at the lab changes as national priorities change.

“So, in the mid-70s, following the first gasoline crisis, there was a big shift toward renewable energies and the lab had to change gears. And then through the 80s, there was another shift in priorities,” he said. “Because DOE is a mission-oriented agency, you have to align with their mission.”

Today, research at the lab continues to be future focused with emphasis on sustainability, energy efficiency, and manufacturing. Sustainability research includes work on reuse, recycling, and upcycling, alternative materials for energy conversion, and reducing dependence on critical materials. Energy efficiency work is realized through investigation of new material behaviors and properties and development of energy saving materials. Finally, developing new materials and manufacturing methods, and creating new and improved methods for using existing materials are part of the commitment to bringing science and industry together.