Ames Laboratory scientist and Iowa State University Distinguished Professor Emeritus Klaus Ruedenberg turned 100 years old on Aug. 25, and the community turned out to wish the centenarian a happy birthday. The Ames Tribune recently profiled the theoretical chemist, and you can read more about his life and science here.

Ruedenberg received the M.S. in chemistry and mathematics from the University of 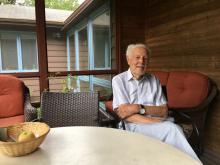 Fribourg, Switzerland, and the Ph.D. in theoretical physics from the University of Zürich, Switzerland. His scientific work is focused on the understanding and prediction of molecular structure and spectra as well as chemical bonding and reactions, based on the quantum theory of electrons and nuclei.

Ruedenberg holds honorary doctorates from the Universities of Basel (1975), Bielefeld (1991) and Siegen (1994). In 2018 he received the Schrödinger Medal, in 2002 the American Chemical Society Award in Theoretical Chemistry, and in 1982 the American Chemical Society Midwest Award. He is a Fellow of the American Association for the Advancement of Sciences, the American Physical Society, and the American Institute of Chemists, a member of the International Academy of Quantum Molecular Science, and an honorary member of the International Academy of Mathematical Chemistry. In 1966/67 he was a Guggenheim Fellow, and in 1982 Fulbright Scholar (and with the Fulbright Fellowship in Australia at Monash University and at the Chemical Physics Lab of CSIRO in Melbourne).  In 1966/67 he was visiting professor at the ETH Zurich, 1973 at the University of California, Santa Cruz, 1974 at the University of Bonn, 1970 at the Washington State University and 1987 at the University of Kaiserslautern. He was editor of Theoretica Chimica Acta from 1985 to 1997 .