As part of Black History Month, we are profiling the career of Black chemist Samuel P. Massie, who contributed to Ames Project’s landmark accomplishments in purifying uranium for the Manhattan Project during WWII. He went on to teach at a number of historically Black colleges and universities, and became the first Black faculty member at the U.S. Naval Academy.

The years 1942-1943 were turning points in history for science, as well as for a young Black chemist named Samuel P. Massie. A precocious student nearly from birth, he’d graduated from high school at the age of 13, and had earned a bachelor’s degree in chemistry at Arkansas Agricultural, Mechanical, and Normal College (University of Arkansas at Pine Bluff) at age 18 in 1937. A master’s degree from Fisk University happened soon after, and by 1942 he was on the campus of 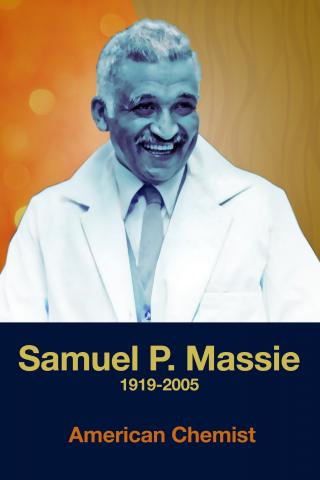 Also on the Iowa State College campus that same year, a chemical research and development program known as the Ames Project was launched to assist a top-secret government science initiative that would come to be known as the Manhattan Project. Ames’ landmark contribution to the world’s first self-sustaining nuclear reaction was the extremely pure uranium needed for Enrico Fermi’s nuclear reactor, Chicago Pile-1, to succeed.

As the Ames Project investigated better ways of purifying and producing uranium throughout 1942, Massie struggled, not with his studies, but with the segregation and racism that were barriers to success for Black students. His laboratory was in the basement of the Chemistry Building (now Gilman Hall), segregated from white students. He was not allowed to live in campus dormitories, and instead lived with the Archie and Nancy Martin family, local Ames residents who supported Black students by providing boarding in their home.

By September, the Ames Project was successful in its mission to deliver uranium to the Manhattan Project, and on Dec. 2, 1942, the Atomic Age began. By early 1943, Massie sought to extend his military service deferment in order to complete his doctoral degree. A member of his draft board objected with a racial slur, saying that Massie already had too much education for a Black person. In response, his academic mentor, Henry Gilman, recruited Massie to work on the Manhattan Project, where he would spend the next three years researching the conversion of uranium isotopes into liquid compounds that could be used in the atomic bomb. The Ames Project went on to produce 2 million pounds of purified uranium for the war effort.

In 1946, Massie returned to his studies, and completed his Ph.D. in organic chemistry at Iowa State. Numerous teaching and research positions followed, at Fisk University, Langston University, Howard University, and the National Science Foundation. From 1963-1966 he served as President of the University of North Carolina at Durham.

In 1966, Massie was appointed as a professor of chemistry at the U.S. Naval Academy, becoming the academy’s first Black faculty member.

Massie told the Washington Post in 1998 that he was unruffled by his introduction to the military college, where the vast majority of his students at the time were white.

"It wasn't difficult for me because I understood chemistry," he said. "I just had to make sure we understood each other."

Massie’s career at the Naval Academy spanned 28 years, where he served as chairman of the Chemistry Department, co-founded a Black studies program, and mentored hundreds of Black midshipmen.

"I'd like to be remembered as a teacher who cared," Massie once said, "as a man who tried to make a difference."

His research accomplishments were noted for his study of phenothiazine, used in treating psychiatric disorders and in cancer therapy; malaria treatments; and medications to treat sexually transmitted infections.

In 1998, Massie was named one of the 75 most-distinguished chemists of the 20th century by the readers of Chemical and Engineering News, one of only three Black Americans who were recognized.