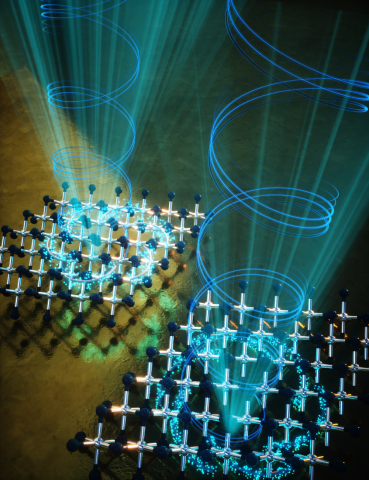 The observation of chirality is ubiquitous in nature. A primary example is our left and right hands. In this sense, it seems that, intuitively, the population of opposite chiralities is expected to be balanced. However, at fundamental levels, the population of opposite chiralities is surprisingly asymmetric. One example is the parity violation in particle physics, which means that the weak force that characterizes subatomic interaction has a definitive chirality. Another example is the homochirality in biology, which means that many essential biomolecules such as DNAs have a definitive chirality. In fact, ever since Louis Pasteur’s discovery of molecular chirality, the ability to achieve chirality-selective synthesis (chiral induction) has been a central goal in the research of stereochemistry, molecular biology and pharmacology. In solid state quantum materials, chirality can be defined in a similar sense: The quantum-mechanical electrical charge distribution in the crystal lattice exhibit a chirality. However, such electronic charge chirality has been very rare. In this work, we study the transition metal dichalcolgenide semimetal TiSe2. We observe a very rare gyrotropic order: The system is originally achiral. But below a critical temperature, the quantum-mechanical electronic charge distribution is spontaneously ordered, leading to the development of an electronic chirality. We further found that shining circularly polarized light across the critical point can help to control the chirality (chiral induction).

Our observation of the rare gyrotropic order is fundamental interest. The chiral induction provides a new way of optical control over electronic chirality in quantum materials. Moreover, it has been recently shown that chiral electronic materials are almost guaranteed to be a special Weyl semimetal in which the two Weyl cones in pair can be largely separated in both energy and momentum. The chirality arrangement of the Weyl cones is determined by the crystal chirality. Such a unique Weyl semimetal is also predicted to host exotic quantized optical responses. Therefore, our finding about the optical induction of crystal chirality points to the possibility of dynamically change the Weyl point chirality. This work has been published in Nature as the cover story.