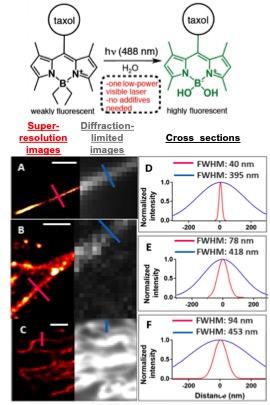 Paclitaxel was attached to the boron-alkylated photoactivatable BODIPY via a 4-(N-hydroxysuccinamidylcarbonyl)styryl linker to image microtubules, which have a diameter that is smaller than the diffraction limit of light. This paclitaxel-BODIPY probe resulted in a three-fold increase in fluorescence upon photoactivation.

Super-resolution images of in vitro microtubules were generated using the paclitaxel-BODIPY probe with an approximately 40-nm FWHM, which is an order of magnitude lower than that of the diffraction-limited image. Microtubules were also imaged in fixed and live cells.  The imaging buffers that were used for these experiments did not contain harsh additives, which are often necessary for photoswitching with conventional SMLM probes and prohibit live cell imaging.